A few weeks ago I was attending a small local car show with my G35.  The show collected a few odds and ends; some very nice Thunderbirds, a supercharged mustang, a beautiful t-bucket hot rod, a few European cars and even a few imports, including my G35 and a Nismo 350Z. In the midst of all the glitz and chrome of the shiny show cars, there was a matte black beast that stole the show for me. Subtle, but striking, the 1953 Ford F100 built by Dub Dog Customs was a modernized classic. A full air-ride suspension system let the curves of the signature bulging fenders lower perfectly over the drilled disc-brakes and big black wheels. The vintage round headlights glowed from within the darkness of the grill like two eyes under the hood. A hood which hid a modern V8 drive train pulled from a Ford Crown Victoria Police Interceptor. These modern, yet classy touches also extended to the interior.  Filling the gauge cluster with modern instruments and easy to reach air ride controls in a comfortable cockpit with red and black trim. After the show, I loitered around until I met the shop owner, Jonny, and harassed him until he let me take a few shots of his most recent creation. I think the results speak for themselves. 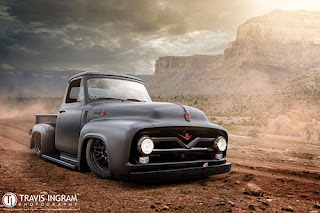 There is also a very kind write up on these photos at ford-trucks.com. Click HERE to check it out.